Debut author T.N. Suarez introduces readers to an intriguing cast of characters along with a masterful use of the unreliable narrator.

Something is wrong with Samantha McCallister. Her brother is dead, and she has only one memory of the accident: the canned version her parents impressed upon her. But piece by piece, Sam struggles to make sense of it.

Cast aside by her self-involved family, Sam seeks out a friendship with the next-door neighbor, Hazel, until Hazel inexplicably goes missing, leaving nothing but a note and a jar of jam.

Determined to uncover the truth about Hazel’s disappearance, Sam finds out more than she bargained for. Bizarre episodes and nightmares consume her, vicious and unstoppable.

Meanwhile, an adolescent muse moves into Hazel’s abandoned home. Sam is immediately drawn to him—discovering the beginnings of true love—when the unthinkable occurs. Sam is alienated to a world in which she no longer feels she belongs.

Try as she might, Sam cannot escape these nightmares or the truth behind them—the truth that lies in the Limbo Tree.

Brilliantly crafted, shimmering with uncertainty, The Limbo Tree is as mystical as it is moving.

T.N. Suarez speaks out about joining the trending Most Unreliable Narrators List for young adult readers in a recent press release.

“Unreliable narrators take many shapes and forms,” said Suarez. “Psychopaths, liars, demons, and children are just a few examples.” Suarez continued, “There have been many successful adult titles written with unreliable narration. Readers love to be misled, and I’m beyond excited to share this deceptive read with the young adult audience.”

The Limbo Tree tells a story with a paranormal edge, in which fate and misfortune collide, spawning an alternate version of reality—that’s when the dark and compelling journey begins. Or does it?

The fallible narrator—brings the big guns to adult novels—guaranteeing a tasty yet uneasy read, leaving you wondering what might happen next. The young adult audience can find the same page-turning, but age-appropriate experience in Suarez’s newly released novel.

“Sorry, teen readers won’t find werewolves or vampires in this mystical read,” Suarez apologized. “But what if when you opened your eyes this morning, it wasn’t the same room you fell asleep in?”

Unfortunately for Suarez’s fourteen-year-old protagonist, Samantha McCallister, that is exactly the case. Bizarre episodes and nightmares consume her until Sam is alienated to a world in which she no longer feels she belongs.

Although The Limbo Tree is an enigmatic journey of foreboding self-discovery, new love, and fortitude, the young protagonist’s interpretation of her nightmares are skillfully misleading to the reader. The results are fascinating, as Suarez cleverly delivers a satisfying ending, uncovering Sam’s truth beyond the Limbo Tree. Suarez favorably joins the trending list of successfully written unreliable narratives for young readers. 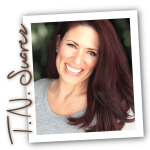 ABOUT THE AUTHOR—Chicago-born author Tania Nicole Suarez, best known as T.N. Suarez, began her writing career while working as an art director for an advertising agency. She holds a Bachelor of Arts degree in Graphic Design and is an internationally published photographer.

A excerpt from The Limbo Tree.

My body struck the floor and the sheets mounded on top of me. I let out a blood-curdling scream and unearthed myself from my linens.

When I’d pawed my way out, I was startled to find that Mom wasn’t there. No one was there.

My door was still closed.

I stood up and scurried to the door. I jiggled the handle; it was locked. I unlocked it and looked out. The unoccupied hallway was dark and silent. My heart raced and my legs trembled.

I’m sleeping. I fell asleep on my bed. I have to be.

But not fully convinced, I inched down the hall to investigate further. When I turned to inspect the bathroom, my face collided with a pile of towels, nearly eating them. It was Mom.

I wearily backed away from her, not sure which Mom I was confronting.

“I heard you scream.”

“Um, yeah, I flushed it down the toilet.” My blood surged as she needled me with her eyes.

Mom leaned in close. “You smell like a pond. Take a shower.” She handed over the warm stack of towels. “Here.”

As I eased inside the bathroom, my heart hammered so hard I heard it beating from outside my chest. I slowly closed the door, watching it, waiting for something else to happen, but it didn’t.

I put away the towels in the closet, turned on the shower, and collapsed on top of the toilet seat. Had my reality and dream world finally collided? Or was I just crazy?

I twirled my hair, giving it a yank, feeling a burning twinge of delight. The pain was real. And so was the clump of hair that emerged from my palm. I rolled the long strands between my fingertips, reminding me of corn silk, and watched them flutter to the floor. My arms curled tight around my legs, I began rocking again. I couldn’t be sure that anything was real at this point. I wasn’t to be trusted. I stood up and looked in the mirror.

An unkempt version of myself blinked blankly back at me; her sullen eyes were encircled by sleepless nights, and her hair was wild as a beast’s, oily and matted. A chunk went missing by her ear.

There I stood, watching the tears spill over her cheeks. I looked deeper into the mirror, watching her mimic my movements. She bit her bottom lip, in serious denial, and pressed her palms against the glass, meeting mine.

“A crazy person doesn’t ask whether they are crazy. They just are,” we said to one another.

The steam condensed on the mirror, leaving only my handprints. And soon the haze filled them in, too. I took off my clothes and stepped into the shower. The hot streams pelted my face as I dared to close my eyes again, rinsing away the insanity. Water slapped the porcelain floor of the tub in short spurts as I rinsed my hair. A slow creak of the bathroom door echoed in between splats and a cold rush of air flooded over the top of the shower curtain. I opened my eyes. Steam had filled the shower, from the ceiling down.

“Hello?” I queried nervously from behind the curtain.

“Pajamas. I’ll leave them on the toilet seat.” Mom’s erratic tone ricocheted around the tiny room.

“Thanks,” I replied, watching her silhouette disappear from behind the curtain.

“To your room when you’re done, Samantha.” Her demand echoed from the hallway.

I cranked the shower knob toward the H. The steam surrounded me and rose to the ceiling. I stood amidst the hot streams, hearing a clang from the vent in the ceiling, and shortly afterward my name echoed through the steel opening. My gaze darted to the ceiling. Wide-eyed with panic, I shut off the water and waited. My name whispered ominously through the same hole in the wall again, entering through the small cracks of my mind between insanity and reality.